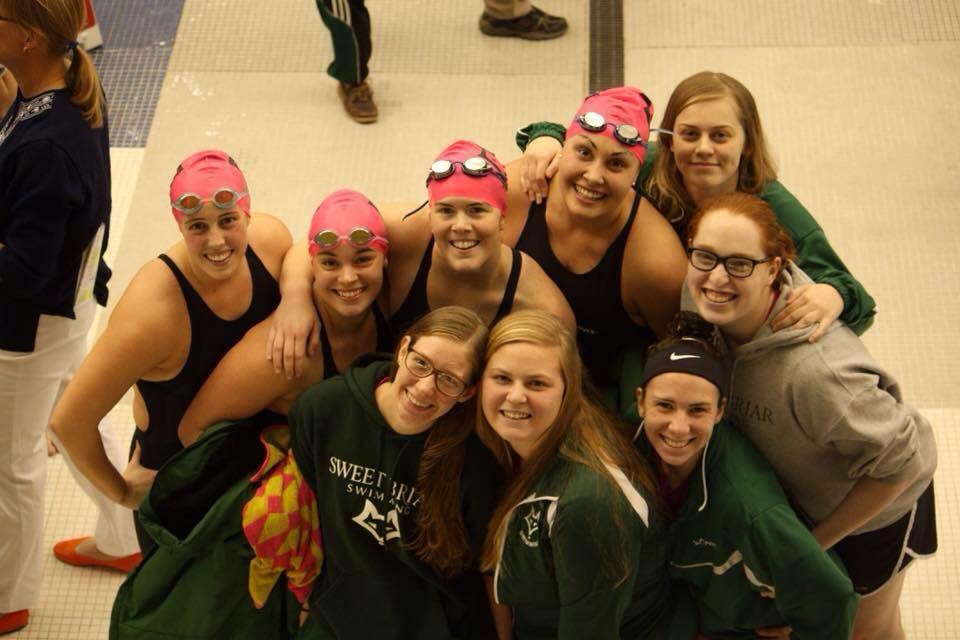 The three day meet, from the morning of February 12th to the evening of the 14th, took place at the Greensboro Aquatic Center in North Carolina. Two sessions of about ten events each are held per day, with all swimmers being eligible to swim in the 10AM preliminaries but only the top 16 allowed to compete in 6PM finals. The numbers of swimmers vary, from seven to thirty six, by event but only eight swimmers can compete at once due to space restraints. Swimmers are separated into either A or B-Finals in the evening by their preliminary time. All of Sweet Briar’s results were in B-Finals.

McDevitt performed incredibly in the Saturday prelims, breaking Sweet Briar’s 100 yard breaststroke record with an outstanding time of 1:10.57. This achievement is made even more spectacular when putting into account that McDevitt had previously tied the former record of 1:10.68, which had been first set by Olive Eiley in 2010, as a first-year.

The meet was won by Washington & Lee University with 1030.5 points, while SBC earned 150, placing them seventh out of ten competing schools. Although many of Sweet Briar’s final events placed well in the B-Finals, the most points were awarded to the top 8 swimmers in A-Finals. Since the team consisted of only ten swimmers, several of them swam multiple events, both individual and team as each swimmer can compete in up to three individual events and four relays.

It snowed heavily on the two hour drive home, but while exhausted, the team showed great excitement in the successes of their teammates. “I am super proud of my teammates for all their hard work and accomplishments this year. A special congratulations to each one of my lovely six seniors on completing their last season; I will miss each one of you! You are awesome!” Zak proclaimed when asked her personal thoughts.

On a more bittersweet note, with six of ten graduating, Sweet Briar will be losing more than half their swim team this spring. These seniors are: Lydia Fleck, Molly Van Buren, Katriana Jorgensen, Kiersten Garcia, Caroline Shepard, and Hannah Oybkhan. With the expectation of Oybkhan, who only joined this year, all five of them have been on the team since their first year. Van Buren also competed on the field hockey team, while Oybkhan is a triple athlete this year in field hockey, swimming, and lacrosse.

With footage of the meet here: http://www.odaclive.com/sports/swim/2015-16/streaming-central