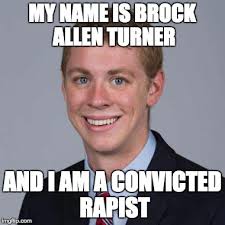 Chances are most people have at the very least heard the name Brock Turner, and even what he did. However, in the off-chance that you haven’t heard anything about him, Brock Turner is a rapist, bottom line.

He took advantage of an unconscious girl behind a dumpster in January 2016, and in March was found guilty on three counts of sexual assault. Also, some people like to mention that he goes to Stanford and is okay at swimming. I guess Stanford doesn’t teach that a no response is not a yes. Neither did having to wait until being told to go in swimming, which should have taught him that you have to wait for consent. But that’s none of my business… Sounds like he’s pretty guilty and deserves some hard time, right? Wrong. His charges could lead up to 14 years in jail, but the prosecution wanted 6 years. The judge gave him 6 months with three years of probation, requiring he register as a sex offender, as well as going to a sex offender rehabilitation program because any more than that would be “too harsh” on him.

Guess what happens 3 months later, though…

What kind of message is this case sending, though? If you are a white athlete with money you don’t have to be a decent human being or treat others with basic respect? Should girls hide away up in a tower until they are ready to get married because otherwise they are too distracting for the boys?

No. Everyone should be held to the same standard regardless of what they’re good at or how much money they have or their race. Girls should be allowed to wear what they want, do what they want (as long as it doesn’t violate someone else’s rights), and enjoy the same things that boys do.

Brock’s dad actually said that his sentence was “too harsh for only twenty minutes of action.” I suppose the part where the girl was unconscious and unable to give consent didn’t register with him, but that mentality needs to stop. Parents need to teach their kids about consent, because everyone should be able to say no. Teach them that the only thing that means yes and gives consent is when the person says yes.

EVERYONE IS IN CHARGE OF THEIR OWN BODY AND HAS THE RIGHT TO SAY NO AT ANY POINT.

NO DOES NOT MEAN YES.

MAYBE DOES NOT MEAN YES.

IF THE PERSON IS UNCONSCIOUS THAT DOES NOT MEAN YES.

BROCK TURNER IS DUMB AS NUTS.